Ten years can make a huge difference. RV life in particular has seen vast changes from 2010 to 2020. Today we’re excited to be looking back on the last decade of RV living.

Before we dive in, let’s note a few big numbers. Yearly RV shipments have more than doubled over the last 10 years (RVIA). There are more than 10 million RVs in use in America. Additionally, over 40 million Americans go camping each year.

We like to use Google search trends as an indicator of intent. The chart below shows the term “RV Full Time.” Since 2009, the searches have tripled.

Needless to say, RVing is a HUGE source of recreation in the USA.

Now let’s break down the unique ways RV life has changed in the 2010s.

The 2010s, more than any other decade, has seen rapid technological advancements happen almost daily! This progress affects all aspects of life. However, RVers have benefited more than others with the advancements in hand held tech and cellular expansion.

Back in 2009, 4G cellular technology was introduced in America. This was the first time we could begin using our hand held devices as an efficient web surfing tool. In 2010 smart phones introduced cellular tethering (turning your phone into a hotspot).

“The decade started with the emergence of 4G/LTE, and technological progress has been steady ever since – with cellular coverage and speeds increasing dramatically over the years. Now at the end of the decade staying connected on the go has become a LOT easier. But it’s still a confusing landscape with so many options to understand to select the right gear, plans and signal enhancing strategies. Connections can often be plenty fast enough for days of two-way video conferences and nights of Netflix binging – and with 5G cellular and a whole new generation of satellites coming in the years ahead, the future of connectivity is looking better than ever!”

Cellular providers (AT&T, Verizon, T-Mobile) have all added unlimited data plans since 2010. These plans have dropped the “price per gig” dramatically over the last 10 years. The cell boosting industry began with its attention on truck drivers…yet, they quickly realized that RVers were a big part of their customer base!

Jonathan Bacon, VP of Marketing at SureCall, fills us in with the evolution of cell boosters in the 2010s:

“About 6 to 7 years ago when 3G moved to 4G cellular internet, signal boosters needed to evolve as well…This also meant that signal boosters needed to deliver faster, more consistent data speeds to the user, wherever they find themselves…And with 5G coming a few years from now, that need is only going to grow, and a signal booster will be a necessity to take advantage of that advance in technology due to the nature of the frequencies it will operate on.”

There’s no doubt that RVing off-grid has seen huge growth. The reason seems to be two fold. Firstly, off-grid technology like solar panels and lithium batteries have become readily available. Secondly, RV parks are more crowded than ever.

In fact, Mike Wendland of RV Lifestyle, sees direct correlation. He says, “solar & off grid tech is being fueled by the lack of campgrounds.”

Wendland knows the industry better than most. He’s been RVing the majority of this decade. His podcast and YouTube channel dive deep into life on the road.

DIY solar for RVs gained popularity around 2009, but it wasn’t until 2011 when the prices dropped. According to Seth Masia in Solar Today, during 2011 fast-growing factories in China pushed manufacturing costs down to about $1.25 per watt for silicon photovoltaic modules. Installations doubled worldwide.

2015 introduced the flexible solar panel. These units haven’t proven to be as reliable as traditional panels. They do, however, have potential to collect more sunlight.

Electric RVs still haven’t entered the market (despite Winnebago hyping their electric RV at RVX 2019). However, as electric cars slowly made their way to the junkyard, innovative RVers began buying the used lithium batteries.

These batteries, Telsa for example, are awesome components of an RV solar system. They can store more power, weigh less, and take a lot more abuse than lead acid batteries.

However, DIY lithium systems can be pretty volatile. They require constant monitoring and shut-off gear to prevent explosions.

Fortunately, RVers in the USA were introduced to “drop in” lithium battery technology in 2017. Brands like Battle Born Lithium Batteries created a battery that looked like a standard lead acid battery, but was actually a lithium unit.

These have all the safety built into them and offer a 10 year warranty. Best of all, the batteries are designed to be a drop in solution that doesn’t require additional build-out for your RV.

Forgive the pun, lithium technology for RV life has exploded over the last decade 🤣

Gas Prices Over The Decade 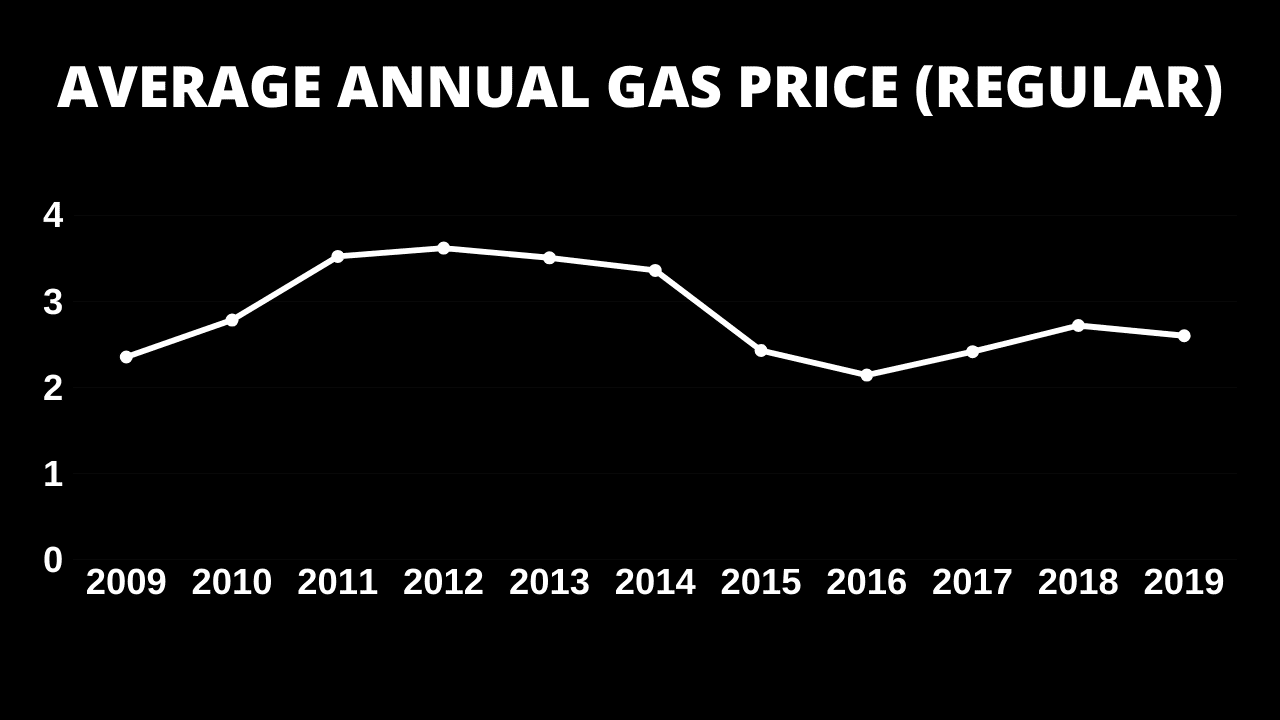 In 2019 remote work is becoming widely accepted! This is huge for younger RVers who still need to earn income.

While the numbers aren’t staggering yet – the trend is definitely moving upwards. Employers are finding that remote work can make employees more productive and is likely to retain employees with the company longer.

Here’s the percentage of employees that work remotely: 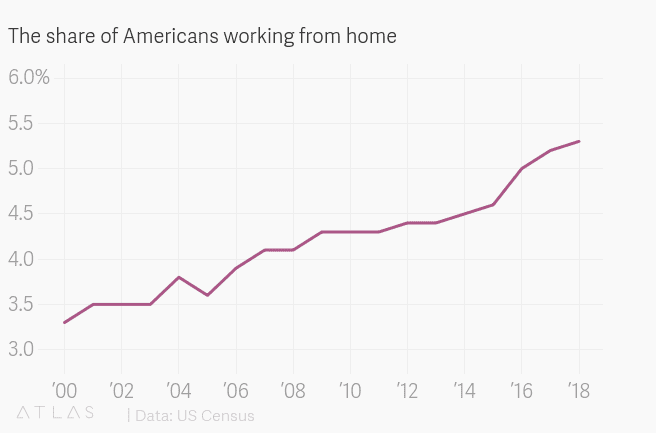 Remote Workers in the USA

Camille Attell, founder of Remote Work School, has been helping nomads find remote work for years (here’s her 6 Tips for Finding Remote Jobs). As Attell looks back on the last decade of remote work, this is what she has to say:

Income is one of the biggest barriers for people who want to RV full-time. And working aged people often postpone their dreams because they think that their job (or jobs) keeps them tied to their location. I can relate to this as Bryce and I had the same fears…and postponed our travel dreams for 5 years!

The employment landscape has shifted dramatically in the last decade, and employers feel the impact. With internet connectivity being easier than ever, and the unemployment rate at an all time low, the rise of remote work opportunities help employers attract and keep talented people. It also saves employers money on costs like employee turnover, office space, and equipment. It’s a win-win scenario for all involved. 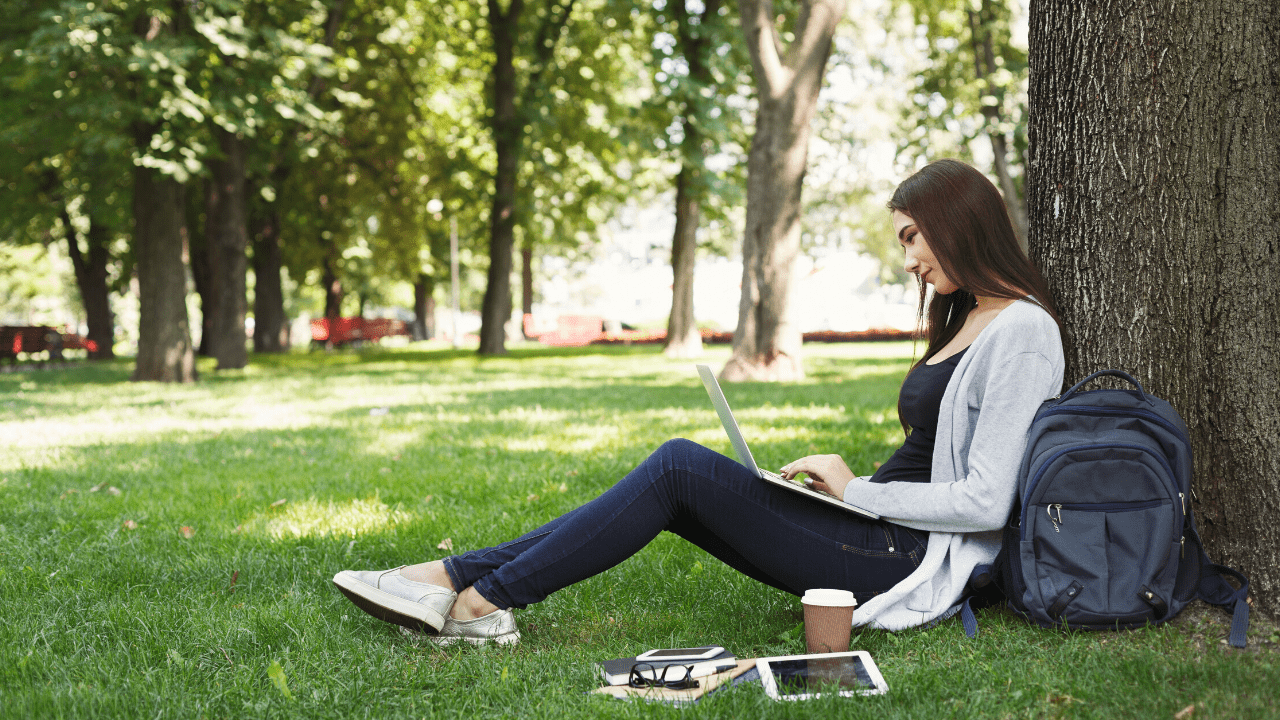 RV Life Resources in the 2010s

More than any other area of RV life, the resources available to RVers has grown dramatically since 2010.

From YouTube to smart phone apps, RV travelers can learn how to fix their water heaters and find overnight parking with a few quick swipes.

In there early 2010s there was a popular saying…”there’s an app for that.” Little did we know at the time, it was just the tip of the iceberg. Here’s a list of RV related apps created in the 2010s that have changed RV life for the better: 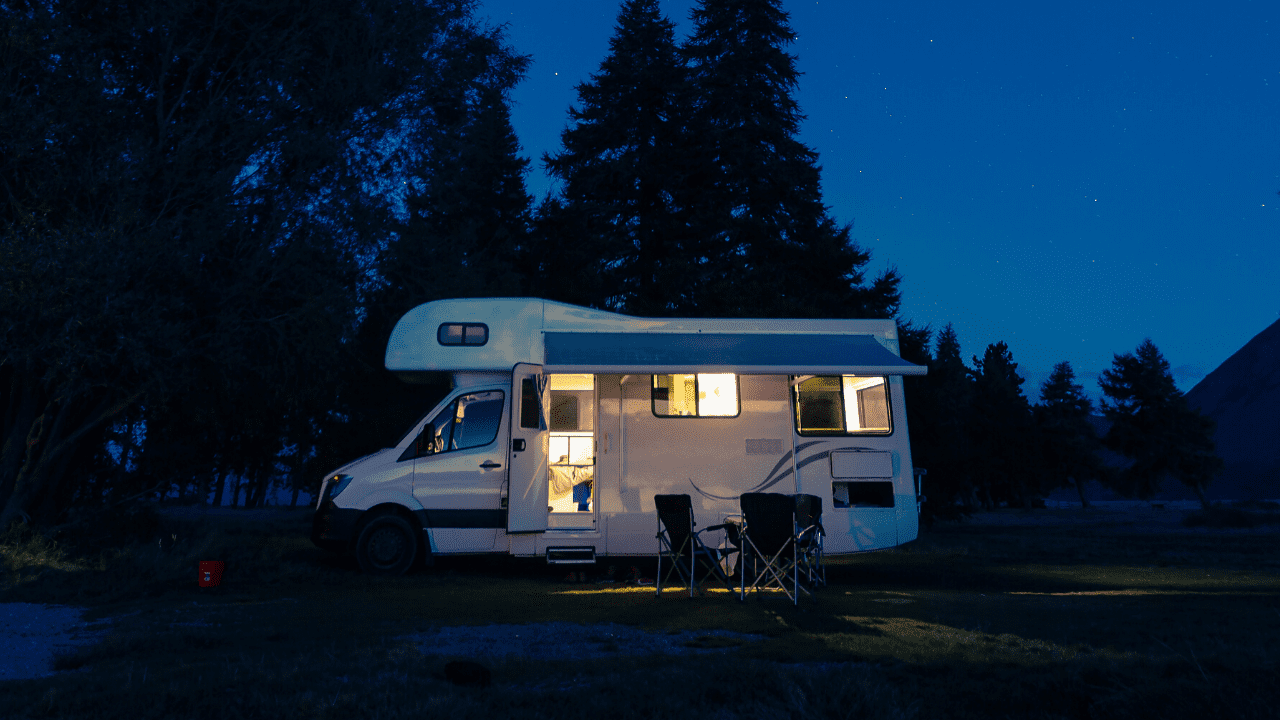 Before we dive into RV specific YouTube, let’s first look at the massive growth of the entire platform. Below is a chart from PEX that shows the “hours of content uploaded every minute.” 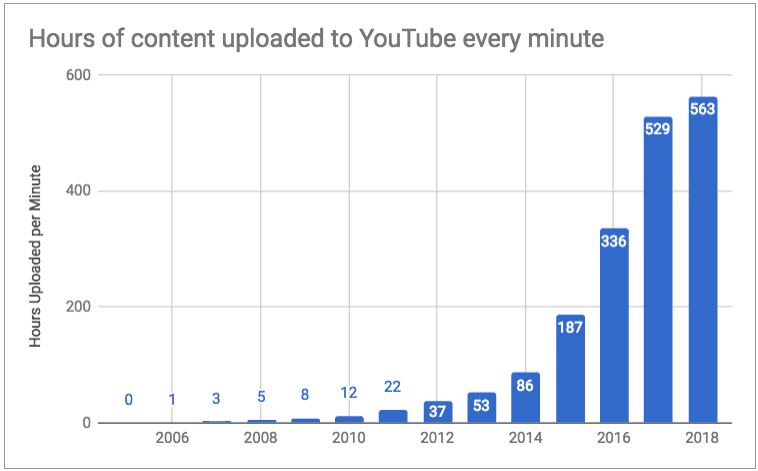 Our research shows that only two major RV YouTubers were around before 2010. Any guesses? Long Long Honeymoon was first-to-market, shortly thereafter followed by Technomadia.

CORRECTION: We initially wrote that Technomadia was the first major RV YouTube Channel.

These days RV YouTube has everything from DIY repair help to campground drama. 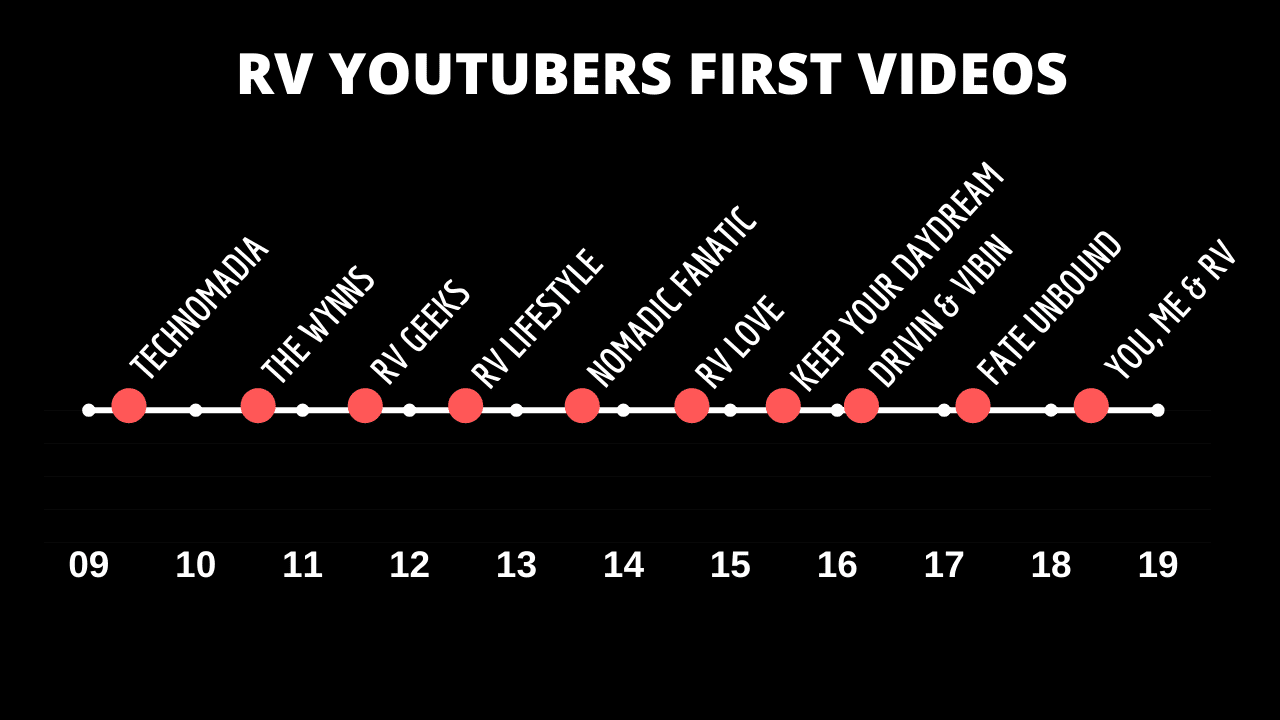 Free Camping Directories in the 2010s

RV boondocking, as stated earlier, has become extremely popular in the 2010s. As campers, we’ve been fortunate to have easy access to online directories for free campsites.

The first of these major directories was FreeCampsites.Net. The Wayback Machine first archived Free Campsites in December of 2008. However, the data base included less than 200 boondocking spots at that time.

Campendium was first archived by Wayback Machine in December of 2013. At that time, Campendium was only accepting invites for its platform, but had no public data.

Both of these user-sourced campsite directories have seen triple digit growth in the 2010s! 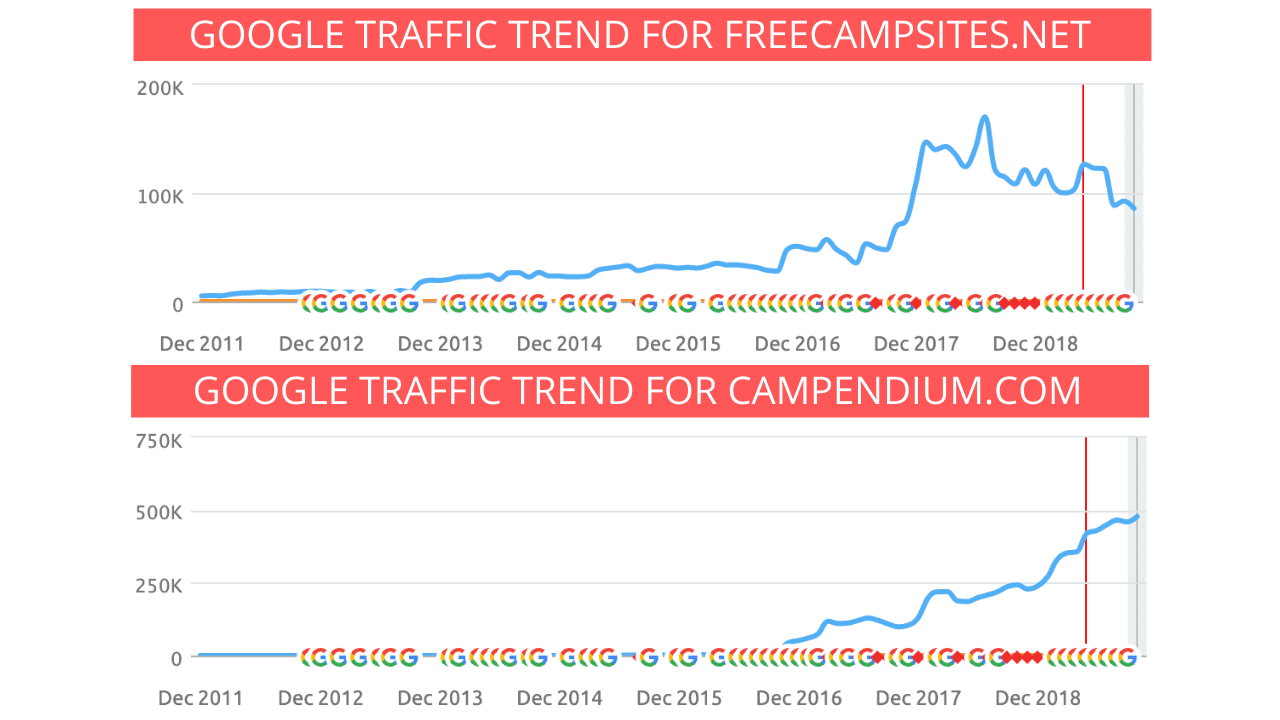 The Jayco Seneca was the first Super C on the RV market. It launched in 2005. However, it wasn’t until 2013 when Super C’s began seeing increased sales.

Steve Bibler of RV Pro says, “Just nine manufacturers competed in this niche market in 2017, although the segment is gaining new interest with every passing year.”

If you want to see the latest developments, check out these awesome 2020 Super Cs. 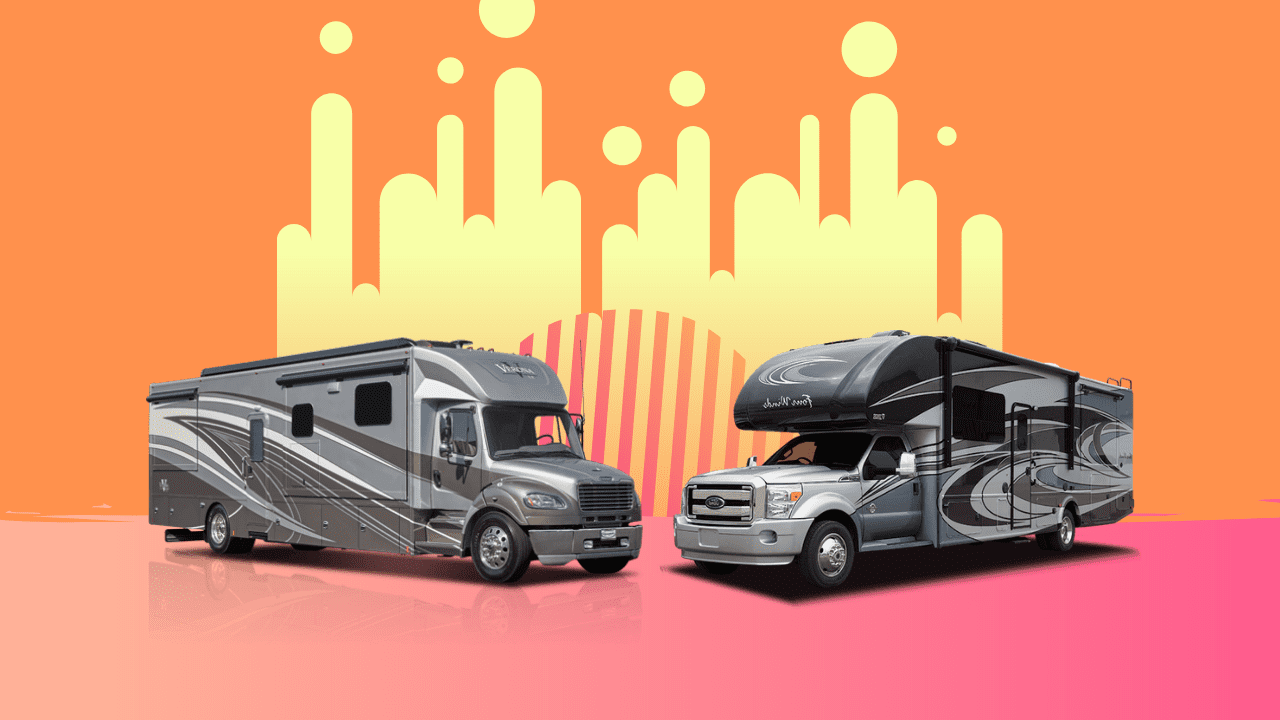 What Changes in RV Life Have Affected You in the 2010s?

We’d love to hear your hot take on the last decade of RV life. Let us know about your in the comment section!

The Best FREE Camping in the USA

We love camping across this amazing country. And, we really love it when its free. Here’s our list of the 20 Best Free Campsites in the USA.

If you haven’t tried free camping before, also known as boondocking, take a look at our beginners guide to boondocking filled with everything you need to know to get started.

Become a FREE CAMPING INSIDER and join the 100,000 campers that love to score the best site! Simply enter your email below.

I really enjoyed reading this. We started RVing in 2014 again with a small trailer. We then upgraded to a 32’ TT with a large slide. Last year we upgraded to a 39’ 5er. We will be full time in a few months.

This is an AWESOME post of the decade guys!!

And wow, we had no clue we were the first of RVing YouTubers - it's been an interesting journey, for sure. And we're so thrilled that so many have since tossed their adventures into the hat to share their stories and inspiration.

By the way - on little correction - the Kyocera 6035 came out in early 2001 - it was the very first smartphone I ever owned (and one of the very first on the market). And tethering/moblie hotspot was very much a thing way back then. In fact, it was because I was already proficient on tethering that when I met Chris in 2006 that I was ready and able to take my career on the road with him. We also have cellular air cards (similar to todays USB cell modems to keep on line.). They may have been 2G/3G speeds - but back then, the internet didn't need as much bandwidth, and we regularly streamed our Netflix from remote places.

Happy Thanksgiving guys.. we are all blessed to have you sharing!

Cherie, when I read that phrase “cellular air cards” I had a total flashback moment! That is how I stayed in touch despite almost constant travel back in the day, had totally forgetten them but I can picture them in my head once I read that phrase. #OldSchool