Is a lithium RV battery setup right for you? Today we’re talking to an electrical engineer (who also travels full time in an RV) to figure out if and why you should switch to lithium batteries.

Tom Morton is our visiting expert. He has equipped his 5th wheel trailer with a Tesla lithium battery and also installed Battle Born lithium batteries in his Lance truck camper.

Mr. Morton also helped us configure and install 500ah of Battle Born lithium batteries in our 1979 vintage Airstream (you can see our system here).

Today, in plan language, we’ll be discussing cost, functionality and safety of a lithium system. Our goal is to help inform you and understand if this is an option you should consider.

Is the lithium RV battery technology new or has it been around for a while?

Lithium technology is not a new thing. It’s been around for quite some time, but it’s becoming more and more prominent in larger power applications.

A lot of the reason for it is that manufacturing practices have brought the price down considerably, and battery management systems that keep lithium safe are becoming more and more prevalent and accessible.

What is the benefit of switching over to  RV lithium batteries from Lead-acid? Because the price difference is pretty high.

Yeah, in general I’m a huge proponent for Lithium and going that route because while the price is high, there are so many benefits to Lithium batteries. Some of the benefits are extremely long life cycle, compared to any lead acid type battery. You should get lifetime life out of these batteries in your coach, even using them heavily

Which is pretty incredible. Actually, over life cycle cost, these batteries should end up cheaper than even a Lead-acid alternative because you won’t have to replace them so often. 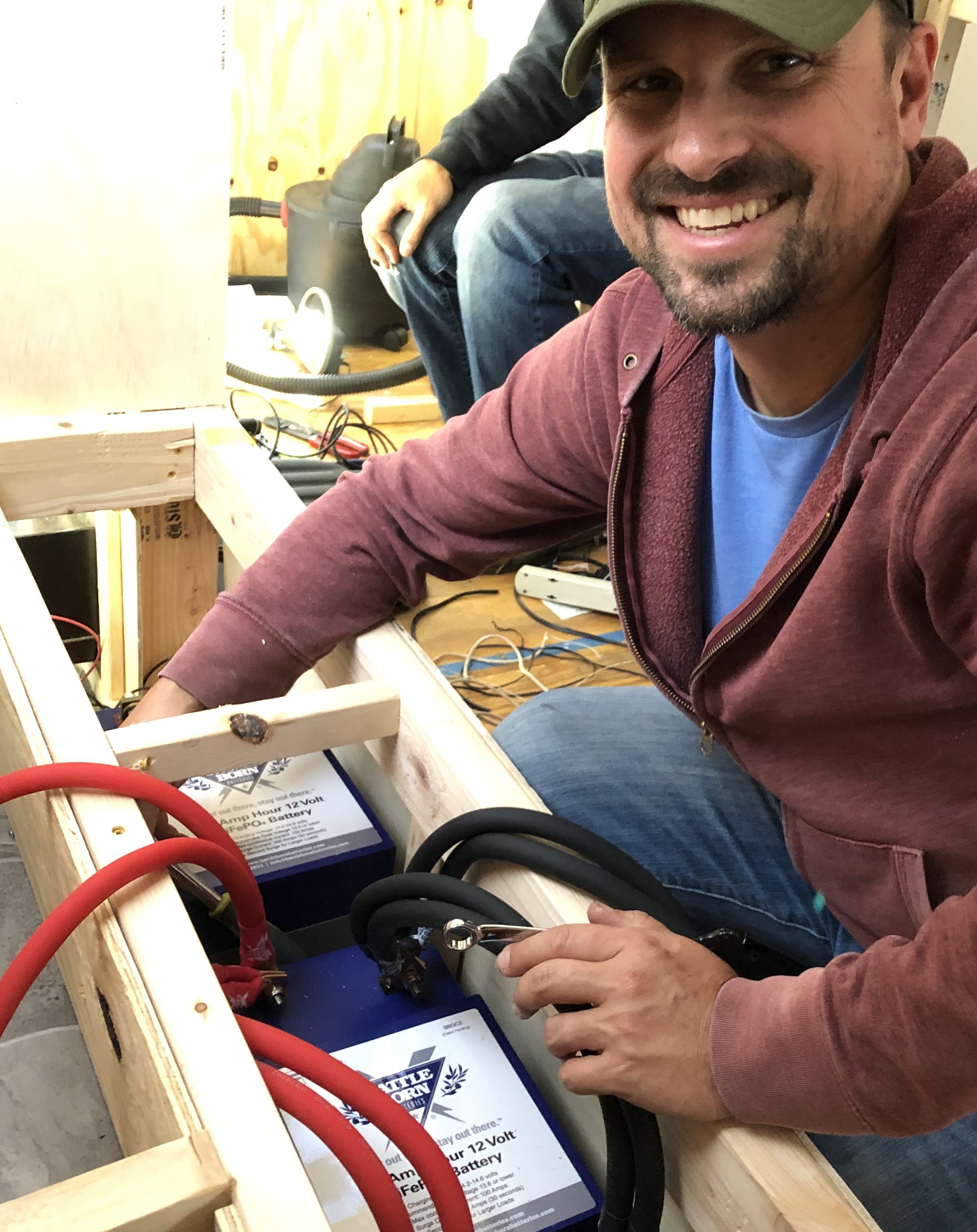 No, not necessarily. While Battle Born and a lot of lithium batteries are rated on their ampacity, their amp hour rating is actually how much power you can use out of the battery. So you can take it all the way down to zero out of the one-hundred amp hours per battery that you can use.

And they have protections and electronic built into every single batteries that will actually take the batteries offline if you hit that low.

So yes, you can run these batteries until they shut off and you’re not gonna hurt a thing.

In most circumstances, the Battle Born lithium batteries, yes you can exchange like-for-like especially in an RV.

Most of the RV battery chargers and things like that are going to work great with the Battle Born batteries.

I would not recommend putting this in like your car –  cars have a very, very high current draw to start the car and then low application draw after that. And cars have a lot of transients. There’s a lot of mess in the car power system, due to the alternator, things kicking on and off. A lot of mess that can damage the BMS systems in these batteries.

So, the lithium battery is good for RV, marine and off-grid use?

If you need a lot of power and you need it in a household type application, yeah they’re a fantastic option. As you said, they weigh so, so much less.

I think these batteries probably weigh about half or less per battery in the same size. But Lead-acid batteries you can really only use about if you have a 100 amp hour battery. You’re only supposed to take that down about fifty-percent. If you take lead-acid batteries down any further than that, you see significant life decrease and damage to the battery over time.

With a lithium RV battery you get a true 100 amp hours.

Another huge benefit to the Lithium batteries that you don’t get with the Lead-acid is, there’s something called the Peukert curve which is when you actually draw, a large draw on the batteries, a Lead-acid battery. That curve it degrades how much power you actually get out of the battery and these basically don’t have that curve. 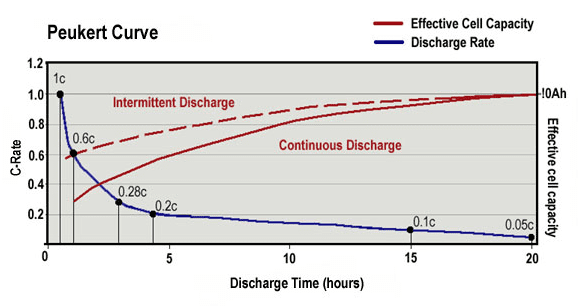 We’re working with 500 amp hours of lithium batteries in our Airstream renovation. Will we be able to run our RV air conditioner with that?

For a period of time, definitely. I mean, you could run your AC off one of these batteries or even a Lead-acid for a very short period of time and the more that you add to your system the more the longer you can run it.

500 amp hours of usable capacity, and that’s usable versus if you had five and a half hours of Lead-acid, you’d really only use 250

What we’re really looking at is kilowatt hours. How many thousand watt hours can you run?

That means that you could run a thousand watt stove for five hours on these batteries. That’s a lot of power.

If you’re AC’s drawing, you know around fifteen hundred watts or so, you should get probably three to five hours of run time out of that on your run system.

Say we take the batteries down to zero percent, do they charge up more quickly than the Lead-acid batteries? Is that a myth or is that true?

The Lithium batteries have a much lower internal resistance which allows them to take a charge much, much quicker than a Lead-acid. And again, you have similar losses in that Peukert curve and such while charging, and those losses are almost negligible in Lithium.

The recharge time can be a lot faster because you can really hammer them with a lot of current and they’ll take it and they’ll charge almost a full charge with that full current, whereas Lead-acid tapers off a lot quicker. So yes, they recharge must faster.

Last question for you is about the safety of Lithium RV batteries. I had read online that people are worried about Lithium batteries exploding in their rigs. Is this a reasonable concern?

And while Lithium’s can potentially be dangerous, we’ve all heard about cell phones and laptops and everything exploding and catching fire, and they have so much energy in them.

But with electronics that monitor the batteries, make sure nothing’s going wrong and take the battery offline in a very dangerous situation, the cells get out of mismatched or the cell voltage goes to high or too low, or they get too cold.

These batteries are also a Lithium iron phosphate battery, which is a safer technology than some of the Lithium ion, something like what I’m using in my RV. But even those batteries with proper BMS systems, Battery Management Systems, can be very safe.

If you want to make the switch to RV lithium batteries, we recommend Battle Born Batteries. They manufacture their units in the USA and each battery comes with a ten year warranty.

Check out our recent 1979 Airstream Renovation to see all the high tech upgrades we made to the vintage trailer.

[…] typical lifespan for an RV battery is 2 to 3 years, and they’re costly to replace. Using solar panels to recharge those […]

One thing you didn't mention is if you are ONLY charging this huge battery bank with solar. Most RVs are set up to charge from the alternator while driving. But you will burn out your alternator charging these Lithiums unless you also buy and install a DC to DC charger to limit the alternator output. Additionally I found out that an older converter isn't built to chage Lithiums , so if you want to charge from shorepower you need to get a new converter. This many Lithium batteries needs a lot of solar panels. Most recommend 800 watts to be able to fully charge. So, 5 100 amp Lithium batteries at $900 each. 800 watts of solar and the MPPT controller. DC to DC charger and new converter at $260 each. Say $900 for the panels and $200 minimum for controller. So $5920 plus sales tax. $495.80 where I live. $6415.80. And I haven't included the cost of the large gauge cables needed. This is one very expensive setup. Since your only job, so to speak, is this website; im guessing because you advertise products such as Battle Born, you get deep discounts or even freebies from the various companies. Otherwise how could you afford all the high end systems you've put in? Many of us full timers are retired on fixed incomes and won't even think of spending this much on a solar system.

@Bob, Very good comment! Would be nice and very beneficial to all of us middle-of-the-road full-time RV'ers, especially retired on a fixed income, to know just how much money needs to be invested to make lithium with or even without solar, work for our needs. I recently purchased a solar generator and even trying to find out what I would need with what I have(400W of solar panels) and a couple of cables to hook them up to the solar generator to charge it, to turn those panels into charging lithium batteries if I switch to them. Find out one thing and then find out another and then another and then... what is the final approximate cost? This I have yet to find out. I really dislike it (a lot) when articles are written that promote a brand but never really tell you what kind of end cost you are TRULY looking at. Easy Guide for DIY re: Lithium is not reflective of the title of this article. Seems more a promotional story for Battle Born.

5 Reasons Xscapers RV Club is for You | Drivin' & Vibin'

[…] find discounts on tires, Battle Born batteries, and even those campground memberships you might have been […]

[…] we use Battle Born Lithium Batteries. Lithium technology allows drainage down to virtually 0% (depending on the BMS). We take our […]