Home » 55 And Up: Why RV Owners Like Age Restrictive RV Parks?

Have you heard of 55+ RV parks? If not, they’re very popular in Arizona & Florida (two states known for active retirement communities and beautiful weather).

RV life is perfect for the active retiree and 55+ RV parks cater to the growing Boomer-retiree demographic.

Today we’re diving deep into these parks and why the majority of RVers appreciate this option. 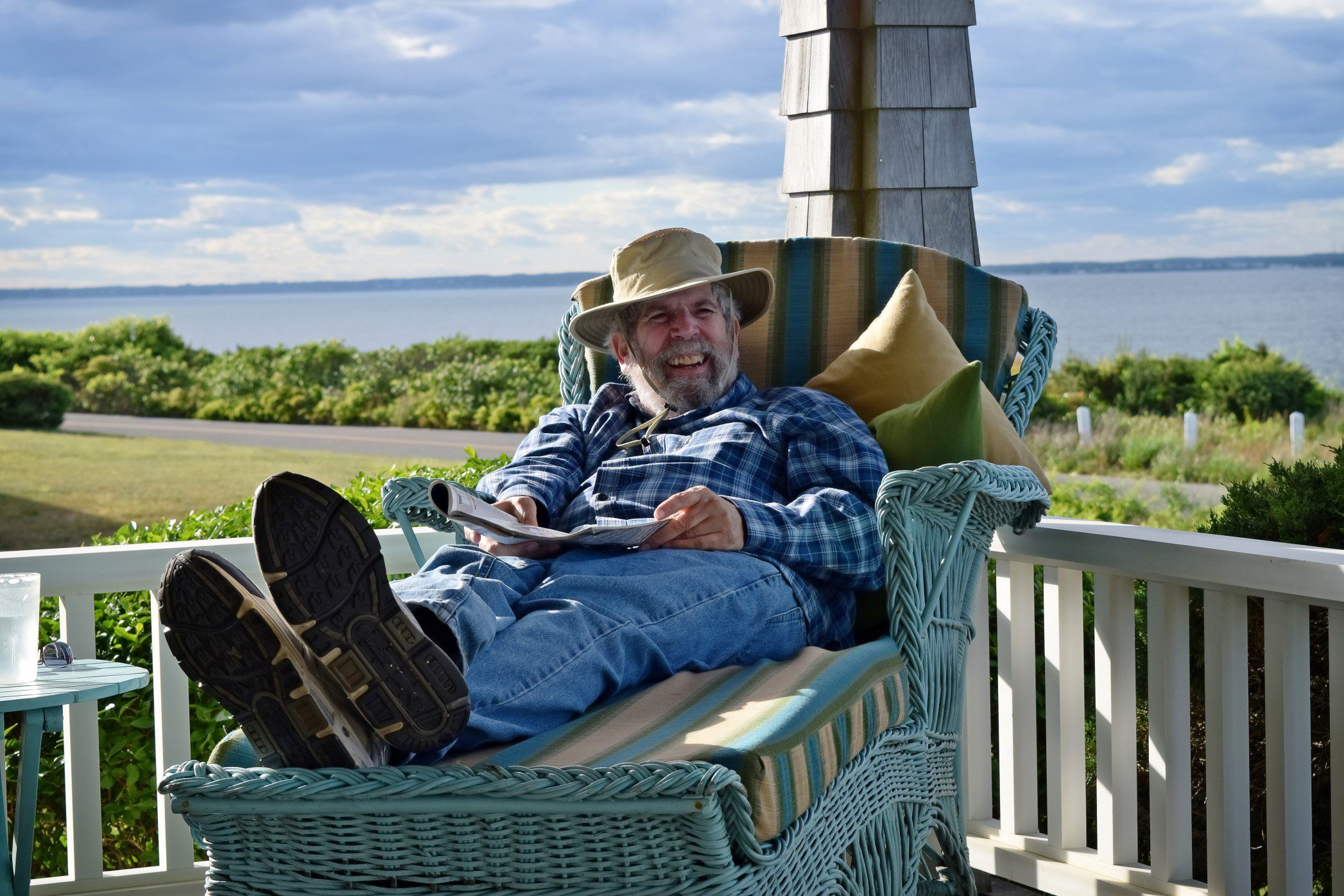 The name says it all. The mission of 55+ parks is to create a mature environment for active seniors who enjoy a social lifestyle.

Yuma, Arizona is host to the most age restrictive RV parks in America. Of the top 25 RV parks in Yuma, 40% of them are a 55+ parks (data from Campground Reviews).

Here’s a chart showing the percentages of age restrictive RV parks in the three most popular RV cities in Arizona. 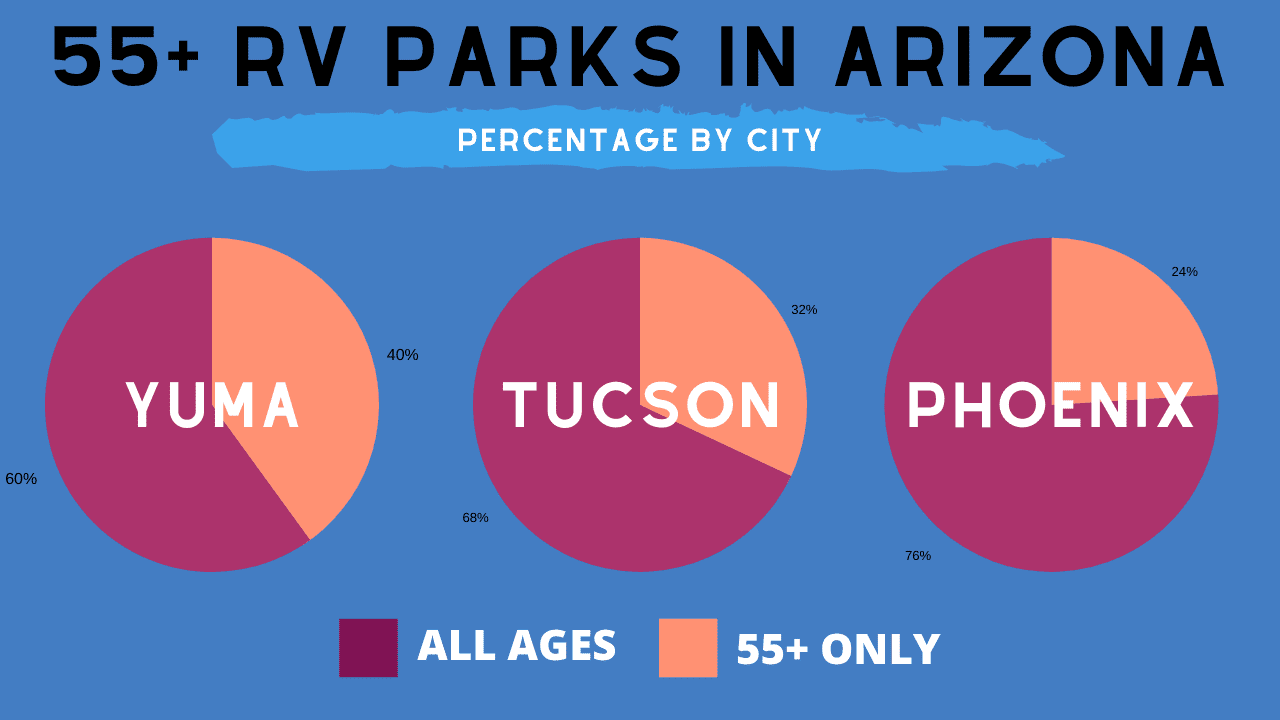 The Palms RV Resort sums their mission it up perfectly:

Our 60 acre community was designed and built with 453 large lots for today’s Baby Boomer just like you who wants the most out of everything from now into the forever. The Palms RV Resort was created to give you entertainment, educational and unique classes, extreme adventures, fitness and wellness, romance and renewal all within a warm, winter Arizona day between an incredible Sunrise and breathtaking Sunset.

Voyager RV Resort in Tucson is one of the most popular 55+ RV resorts in the area. Here’s what they offer their 55+ community:

Take a look for yourself – here’s the Voyager RV Resort calendar of events. 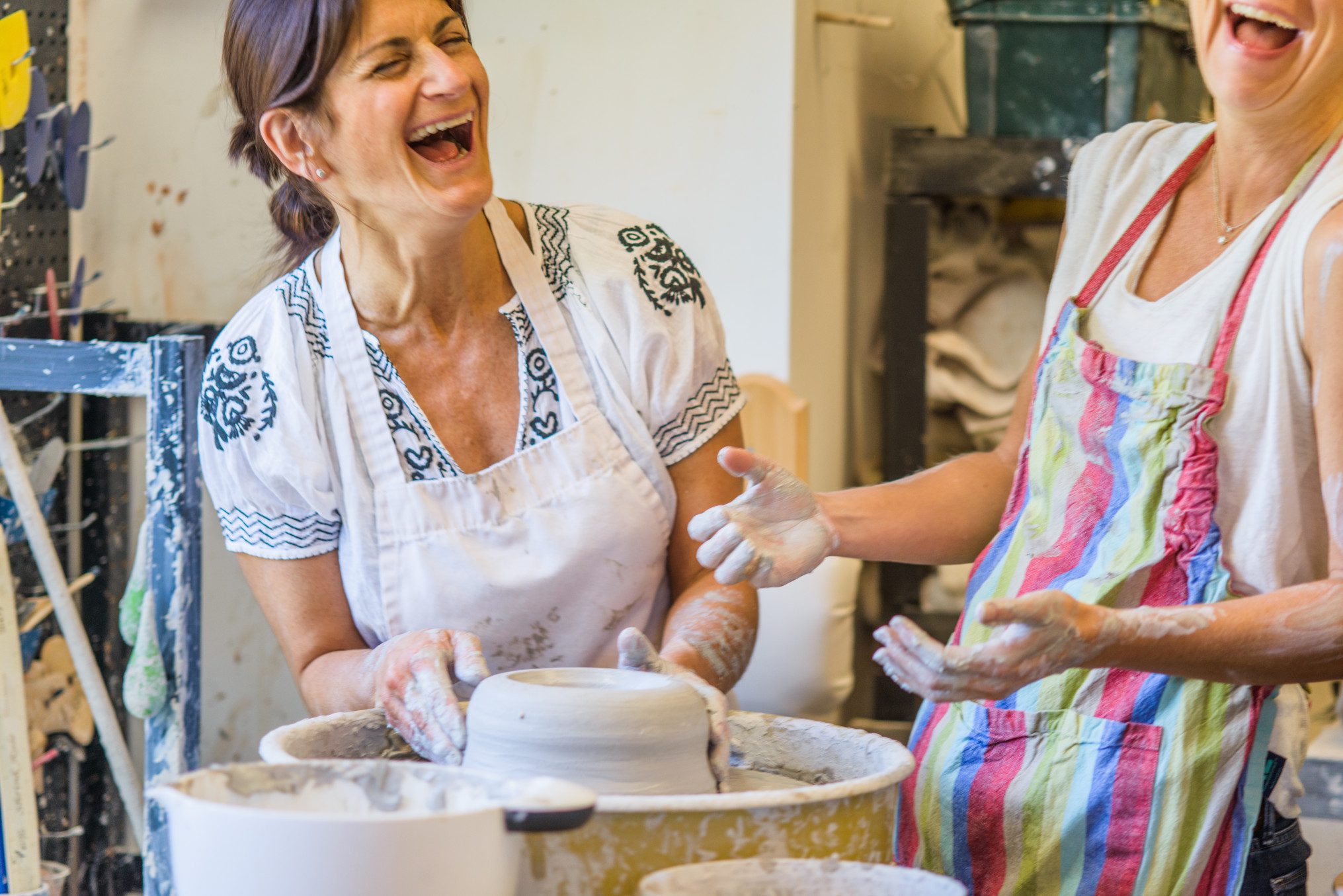 Are They Less Expensive Than Normal RV Parks?

Quite often these parks charge a premium due to the well maintained facilities & activities provided.

If you’re looking for a lower cost 55+ RV park option, consider joining the Escapees RV Club. Their membership includes access to SKP Co-Op parks. Most of these parks are 55+ and offer extremely low monthly rates. You can even get on a list to buy an RV site.

Sometimes. Each park has their own policy for allowing folks under 55. We’ve camped at multiple 55+ RV parks (we’ve still have 20+ years to reach 55), but we’ve also been rejected by a few.

In our case, the reservations are short term – to restock & dump between boondocking stays. 55+ RV parks usually don’t have an issue with a short term reservation if they have the space.

But, honestly, we don’t like the looks we get when we camp at these parks. It’s not that the people are mean, it’s just that we’re “out of place.”

Why Do the Majority of RVers Enjoy 55+ Parks?

The answer is pretty simple. The majority of RVers are over 55 years old. People in general don’t like being excluded from things, but because most RVers aren’t excluded, it’s not an issue.

We surveyed hundreds of RVers and the sentiment was clear: 61% of RVers think “Age Restriction” is fair. Here’s what those “for it” had to say:

39% of RVers said they don’t think age restrictive parks are fair. Many of these folk feel like 55 is an arbitrary number, especially when the goal is often to have “no kids allowed.”

Here’s a few voices from the other side:

Is It Legal? Or Is It Age Discrimination?

55+ RV parks are legal. Technomadia wrote an awesome article explaining this in detail. In one of the key points Cherie Ve Ard writes:

“The ‘Housing for Older Persons’ (HOPA) is an official HUD (U. S. Department of Housing and Urban Development) exemption. It supplements the Fair Housing Act originally designed to protect residents from discrimination on the basis of race, color, national origin, religion, sex, handicap or familial status.” – Cherie Ve Ard, Technomadia

Title VIII of the Civil Rights Act of 1968, the Fair Housing Act, prohibits age discrimination in housing. A 1988 amendment to the act created an exemption for housing for adults age 55 and over as long as it provided facilities and services designed to meet the physical and social needs of the elderly. However, the Housing for Older Americans Act of 1995 eliminated this requirement. In addition, these communities often are designed for and marketed to customers in their 50s and 60s who are more interested in golf courses, swimming pools, and other community amenities than in the supportive services they may eventually need.

Consequently, it would be illegal to open an “under 55 only” park. That would be age discrimination – a protected class in housing laws.

People Aren’t The Only Ones To Receive Age Restrictions

Age restriction rules are much stricter when it comes to your RV! Many RV resorts restrict old RVs.

The 10 Year Rule is widely unpopular among RVs. Yet, here’s why RV Park Owners love it!

You Have Options, It’s Called Boondocking!

If rules make you squirm and you want to camp far away from people, we recommend boondocking. That’s another way of saying “free camping.”

You don’t need reservations or much money!

The Best FREE Camping in the USA

We love camping across this amazing country. And, we really love it when its free. Here’s our list of the 20 Best Free Campsites in the USA.

If you haven’t tried free camping before, also known as boondocking, take a look at our beginners guide to boondocking filled with everything you need to know to get started.

Become a FREE CAMPING INSIDER and join the 100,000 campers that love to score the best site! Simply enter your email below.

I think it can cut both ways. A lot of older folks in these 55+ parks can be just plain irritable and intolerant. It's not a pleasant group to be around. But I have lived in places where the teens and younger adults are noisy, disrespectful, even violent. I don't have the answer. There is not a perfect community. I think EDC1951 made the best comment. Perhaps a mixture of all groups is best.

We are snowbirds from Canada and like the 55 Plus for our long-term winter stay. We love our kids and grandkids but it's nice to get away as well. Our first time in Arizona at a 55 Plus, we discovered that when the sun goes down, they roll up the streets. No parties, no kids laughing and screaming - just peace and quite. Unless you want to go to Bingo, a dance with a band, movie night in the park, or just play cards with friends. We like to sit around our propane fire pit with our friends and talk quietly. We had to stay home these last two winters due to border closures, but have made reservations for winter 2022-23.

I’m in that older group and even though Im not a big fan of 55 and older parks I understand them and say to each their own. Everyone has a right to how they want to live when they retire, if they can afford it. Most kids are just being kids but you do have some that I definitely would not want to be parked next to. Sometimes it’s not just the kids it’s the adults that can be annoying in any age group. Everyone I have encountered while camping have been very nice, kids and adults.